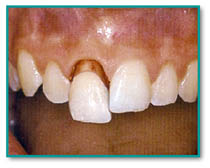 In my dental career, I have had the opportunity to help two individuals who knocked their teeth out during sporting events. The first one was during a soccer match. I was watching a buddy of mine play in an adult soccer league when all of a sudden with a couple of minutes left in the game, a fight broke out near the far sideline. Once that was broken up, they completed the game. Afterwards, I noticed that all of the players from both teams were over by that sideline looking on the ground. I thought that someone had lost a contact lens. At that time, my friend, knowing that I am a dentist, came over and told me that a player had had a tooth knocked out during the fight and was wondering if I could help. As I walked across the field, the player came over holding his tooth in his hand. Since we were standing in the middle of the field with no water available (the field was only serviced by Port-A-Potties), I had him roll the tooth around in his mouth to clean the dirt off of it. Then, crunch time came. I took the tooth and firmly inserted it back into the socket. I could tell that it smarted quite a bit but I don’t normally carry a syringe full of Novocaine with me. There certainly weren’t any tears. There was no way that he was going to let his teammates think he wasn’t tough. I instructed him to see his dentist the next day. When I checked with him later in the week, he was doing just fine. His dentist did a root canal for the tooth.  A year later, I asked my buddy how his teammate was doing and he said that his tooth was doing just fine. Happy endings are always nice.

Removing a tooth is not the brute force that is the common perception. Extracting teeth actually requires a lot of finesse. There is a small space between the tooth and the bone. This is where the periodontal ligament resides. This ligament is what holds teeth in. Teeth are not set rigidly in concrete. If you’ve ever looked in the mirror and tried to wiggle your teeth with your fingernails, then you’ve probably noticed that the tooth will move slightly. This allows the force of the bite to be buffered before it gets transmitted to the bone. The trick to extracting a tooth is to break the periodontal ligament. Pressure is applied slowly until the microscopic fibrils of the ligament begin to snap. If the pressure is applied too fast, then the tooth will usually break apart in a very inopportune place.

The pressure to extract a tooth can be applied by a variety of instruments; the most common being the forceps. Forceps look like common household pliers only with very specialized beaks. Other instruments called elevators are commonly used. Elevators resemble a screwdriver, except that is is curved to match the contours of a tooth. An elevator is placed between the teeth and gently rotated until the tooth raises from it’s socket. This way, teeth can be removed in a very comfortable manner.

A goal of every dentist is to save teeth, however, there are times that the best thing for a tooth is to remove it. If there is not enough room for wisdom teeth – out they come. If the teeth are too crowded, then the orthodontist may recommend extracting some strategic teeth to make room. We can rebuild teeth that are broken down by decay or fracture from the “ground up” but if the damage slips too far below the gums or bone, then the best alternative may be extraction. Fractured teeth many times can be saved by placing a crown or cap over them, however, if the fracture goes too deep into the root, then the only solution is removal. Teeth that have had root canal treatment tend to be very brittle since there is no nerve inside to bathe the tooth with fluid. If these teeth are not restored with a crown, then there is a high likelihood that the tooth will split and need to be taken out. The most common reason for the need for tooth extraction is gum disease. Severe periodontitis (gum disease) can affect many or all teeth in the mouth causing the teeth to loosen and thus will need to eventually be removed.