A root canal is not something that we normal humans would look forward to. How about the poor people who have to have a root canal retreated? It’s a common perception that once a root canal has been done, there will never have to be anything else to do for that tooth. While that is true with most root canals, there is an occasional one that is not successful.

The most common reason is not being able to get a good seal on the root. Any leakage around the root canal filling material can allow bacteria to filter in. Since there are no blood vessels in the area (those were removed by the root canal process), there will be no way to get antibodies and white blood cells to the area. This way, the bacteria can proliferate causing an infection. The only way to correct this problem is to retreat the root canal. That is done by opening up the tooth, then softening and removing the gutta percha filling material. After that is done, it’s a good time to search for extra canals or unusual root anatomy. All of the canals are cleaned thoroughly and irrigated with sodium hypochlorite. At this point, a decision is made on whether to place medication in the tooth and allow it to heal for a week or two or to go ahead and fill it that day. Retreatments do not enjoy the same success rate as original root canals, but they work often enough that they are sure worth giving a try.

A parulis is commonly called a “gum boil”. It is caused by an infection around a tooth root that has expanded to the point that it has burrowed through the outer layer of the bone and has begun to seep into the mouth. 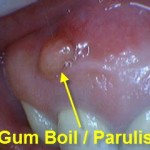 This tooth infection can be started by a deep cavity, or fracture of the tooth, or by a severe gum pocket that has caught some food in it. With infections, the body tries to ward off the onslaught of bacteria by sending an army full of white blood cells to the area. As these white blood cells and bacterial sludge collect, they will put pressure on the surrounding tissues, in this case bone. Since bone is very sturdy, initially, the infection will put pressure on nerve endings causing much pain. As the pressure builds, the bone will begin to erode. At this point, the bone has been weakened and begins to expand. The resulting pus will find the weakest point and break through the bone. At this point, there is usually major relief of pain since the pressure has been relieved inside the bone. Just because the pressure has been relieved doesn’t mean that the saga is over. The source of the problem must be addressed, that means either doing root canal treatment, gum treatment, or extraction.