A Water Pick can be a helpful aid in oral hygiene. For orthodontic patients who have braces, it can be a big help to flush food particles that are trapped in the little nooks and crannies under the wires and brackets. For periodontal patients (those with advanced gum disease), it can be helpful to deliver chemotherapeutic agents deep into the pockets between the teeth and gums where the bone has been destroyed by the disease. It is important to not use the Water Pick at a high setting in order to avoid stripping away the gingival attachment (the portion that connects the gums to the teeth). Although a Water Pick can be a good adjunct, it is not a full alternative to using a toothbrush and floss. Plaque is formed by bacteria which converts sugar into a sticky substance. With the bacteria stuck to the teeth, they are free to form acids and toxins which are the cause of decay and gum disease. A Water Pick is not strong enough to clean the sticky plaque off the tooth surfaces, therefore, a brush and floss must be used.

Periodontal (or gum) inflammation is a response of the body to the onslaught of bacterial toxins and acids underneath the gums. Various factors such as diabetes, smoking, genetics, etc. can change the severity of the body’s response to these bacterial products. Inflammation results in redness and swelling of the gums. The body will send a lot of immune cells to try to remove the irritating substances that are residing in the gums. This immune response is essential for the body to ward off infections, however, in a situation where the oral hygiene is not good, the inflammatory response becomes chronic and the body is not able to return to normal health. This causes the eventual breakdown of the bone that holds the teeth in place. Symptoms of periodontal inflammation include bleeding and red gums. More advanced cases lead to loosening of the teeth and pus exuding from the gums.

The by-products of inflammation eventually overtake the body’s system of repair resulting in permanent damage. The only way to break this cycle is by performing meticulous oral hygiene (simple brushing and flossing) on a daily basis.

If you ever notice blood on your tooth brush after brushing your teeth, chances are that there is gum disease present. There should not be one drop of blood present on a brush or floss after use. These warning signs should be heeded earlier as opposed with later. Before you run to the dentist with bleeding gums, it is best to try a regimen of good oral hygiene first. Just simple but thorough brushing and flossing a couple of times a day can go a long way in stopping bleeding gums. I have actually had patients who have told me that they purposely did not floss because every time that they did, it made their gums bleed. What they didn’t realize was that by not flossing, it left the bacterial plaque behind that is the cause of the bleeding in the first place. The patients were thinking that the mechanical cleaning with the floss was what was causing the bleeding to occur, whereas, it was actually the gum disease itself that caused the problem. It may still take a trip to the dentist for a professional cleaning for the bleeding to subside. But by doing the good home care ahead of time, it can be the first step toward eliminating gum disease in your mouth. 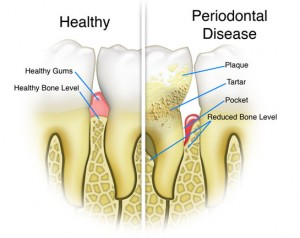 A gum procedure called scaling and root planing has saved millions of teeth. Periodontitis (gum disease) attacks the bone that holds the teeth in place. If left unchecked, it will eventually lead to tooth loss. If the disease is detected in its early stage, scaling and root planing can be a big help in altering the course of the disease. Periodontitis is caused by an interaction between bacteria that reside on the teeth and the body’s immune system. If the bacteria is removed on a daily basis by brushing and flossing, the disease usually does not occur. However, if the home care is not good, the bacteria will wreak havoc. 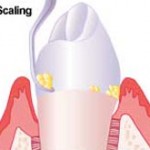 Over time, the bacteria will calcify into a material called calculus (tartar). The calculus is very porous giving a safe haven to new bacteria, so even if flossing is started, it will not clean away the bacteria residing in the tartar. Scaling will remove these deposits from the teeth. 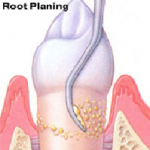 Root planing will smooth the roots and remove diseased cementum (the live covering on the root surface). Scaling and root planing will allow the body to heal the gums and give someone a fresh start. However, the disease will return if the daily home care is not done.

Gum recession is a very common problem. It can cause cold sensitivity on the exposed roots. In severe cases, it can lead to bone loss causing the tooth to loosen and eventually loss of the entire tooth. The recession can be caused by improper tooth brushing, thin gum tissue, abnormal muscle pull, or trauma. The good news is that we now have surgical techniques that will allow the gum to be rebuilt close to the original level. The procedure involves harvesting a piece of gum tissue from the roof of the mouth, stripping the top layer of gum tissue in the affected area, then suturing the new piece in place. After a few weeks of healing, the tissue looks almost as good as the original. Aftercare is extremely important to keep the problem from recurring. Very careful use of a toothbrush in the area is a must.

The procedure is usually performed by a periodontist, a specialist in treating the gums. If you going to have this procedure done, ask the surgeon to make a surgical stent to cover the roof of your mouth. This area can be extremely painful if left exposed. The feedback that I have had from my patients is that they have been extremely grateful that the roof of their mouth was covered. This made their healing time much more uneventful.